Star Wars celebration has officially made its way to Fortnite. Since May is Star Wars month (and especially in 2022), Epic Games decided to have fun again. Lightsabers, which were originally leaked in Chapter 3 Season 1, have officially returned to the loot pool and are the subject of a new XP challenge.

Along with that, the Item Shop offers Star Wars skins like Kylo Ren, Rey, Boba Fett, and more. Star Wars is back in Fortnite and also brings a brand new NPC to the island with the v20.30 update.

Returning to Fortnite from a galaxy far, far away…

Lightsabers are back! Climb aboard now to use the Lightsaber item, complete limited-time quests, and more!

Back to Fortnite from a galaxy far, far away… Lightsabers are back! Climb aboard now to use the Lightsaber item, complete limited-time quests, and more! Access more: fn.gg/Maythe4th https://t.co/GtKS2ikoAw

Stormtroopers have landed on the island, and they can give players an amazing weapon. Here’s how players can get it.

Checkpoints are near The Joneses, near Camp Cuddle, and near Sleepy Sound. Players can search for these locations on the map.

There will be two Stormtroopers at each checkpoint. They can sell the Mythic E-11 Blaster Rifle to players. It costs 100 gold bars, so it’s one of the cheapest weapons to buy and costs a lot less, especially cheap for a mythic weapon. 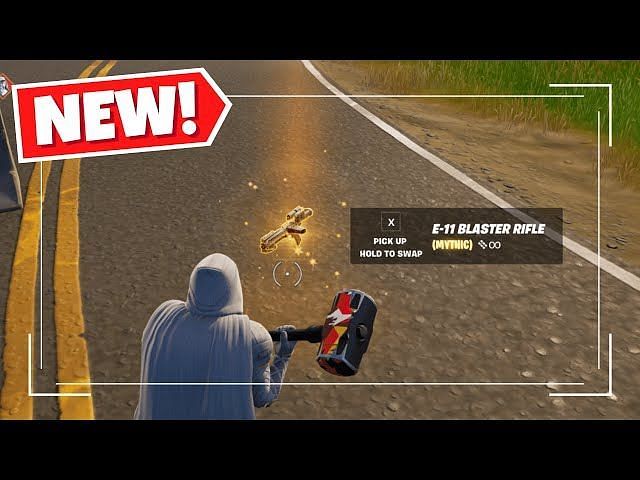 The alternative is to kill a Stormtrooper and they will drop the weapon. However, this method is more difficult and dangerous. The low cost of the weapon makes purchasing it the most viable option.

Once players have the Mythic blaster, they will be able to shoot almost endlessly. It has unlimited ammo, which means it will never run out. Although there is a cooldown after overshooting, it doesn’t last very long.

According to the Fortnite Wiki:

“The E-11 Blaster Rifle functions almost the same as the First Order Blaster Rifle, but with a faster reload time and faster rate of fire. The weapon fires at a medium rate, dealing moderate damage The E-11 blaster rifle has a cooldown similar to the Minigun.”

The E-11 Blaster rifle was originally introduced in Chapter 2 Season 5 for The Mandalorian. It was initially his weapon, which he would drop if killed. It has the following stats:

Read also
The article continues below

The rifle also has a headshot multiplier of 1.5. Although the rifle has prompted many players to try it out, it is currently not the subject of any of the Star Wars quests. These quests allow players to complete specific objectives and earn rewards. These quests are live in-game right now.