Many Greater Cincinnati residents have taken to Instagram to document architectural gems within their own communities, including Jerald Cooper, whose @hoodmidcenturymodern been the subject of a recent CityBeat cover story.

“Our physical environment impacts our well-being, whether or not we are able to express that impact in words,” says Maya Drozdz of the Cincinnati Preservation Association. “We regularly interact with buildings, and they are always present, shaping our understanding of our community and the places we visit.”

Here’s what the minds behind three local architecture Instagram accounts are saying CityBeat on the importance of knowing your own backyard.

A history teacher at Walnut Hills High School, Kevin McCormick moved to Cincinnati from Michigan in 1994. Almost immediately, he was struck by the city’s unique vernacular architecture.

Now a resident of East Walnut Hills, each of his posts (over 2,000 now) is paired with a brief historical account of that day’s featured building. A July article, for example, features a building designed by architect Edward Schulte in 1931 that once housed the Paramount Theater.

“The limestone facade features stylized chevron relief, circular patterns and materials associated with the machine age,” the post read. “The iconic structure was the cultural hub of Walnut Hills for generations before changing economic realities left the building derelict and derelict. In recent years, however, the Deco luster of the facade has returned as the revival of Walnut Hills has restored economic vitality to Peebles Corner.

McCormick says that over the past 20 to 30 years the city has lost a significant number of buildings. Promoting the preservation of these spaces as integral to maintaining the cultural fabric of the city is a big part of why he opened the account to begin with – with the “selfish pursuit of beauty and wondrous architecture” , he said.

His favorite architectural find? McCormick says that’s constantly changing. He says that since Cincinnati experienced strong population growth in the 19th century, there is an impressive collection of Victorian-era architecture. But when McCormick first settled here, it was the Second Empire and Italianate style that he turned to.

“I remember moving here in the 90s and walking street after street in Over-the-Rhine and being amazed by the architecture,” he says. “When I moved here, I had no idea what I was going to encounter, but I was so blown away by how cohesive the Italian-style collection was.” 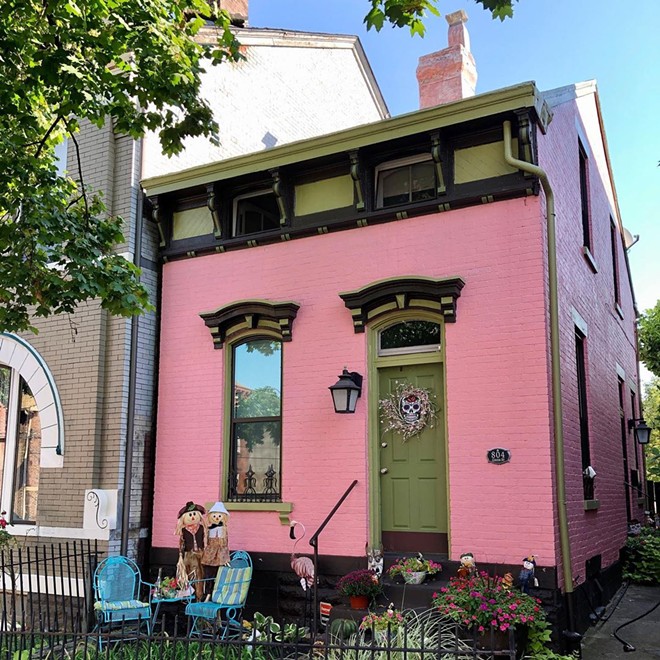 A historic home in Covington

A fan of Instagram accounts like Cincinnati Revealed, Heather Churchman was strolling through the historic Licking Riverside neighborhood of Covington when she got the idea to start her own page for Cincinnati’s southern neighbor.

A former librarian and current writer, Churchman marries two of her skills: research and storytelling. While other accounts delve more into architecture, Churchman often details interesting information about the former occupants or architects of a house.

“There are so many people who have passed through our city and these walls, and no one knows unless someone finds these stories,” she says.

While some of Churchman’s stories come from people messaging him with advice, others are born out of personal inspiration — spaces that spark his interest or a striking photo taken while walking.

One thing Churchman loves about this job is the sense of community it instills. Throughout his posts, there are comments remarking that a relative has been featured or has always admired the buildings on his own walks.

“It’s cool to feel so in love with where you live and help others feel the same way,” she says. “There’s such joy in coming out and thinking, ‘All these buildings have been there for 150 years.’ It’s so much fun to hang out and think about what he loved before, it’s something anyone can connect with wherever they are.

A barn near the historic district of Roseville

Phil Thayer has long made walking a hobby, especially with his wife and German Shepherd. Originally from Fairfield Township, Thayer now resides in nearby Hamilton. Her story functions as a love letter to Hamilton and the unique buildings that populate it.

Thayer created the Instagram account at the start of the COVID-19 pandemic to document the city’s architectural features, and he explores most places on walks with his dog. Finding content for the account has pushed Thayer to explore more neighborhoods, dive into back alleys and take roads he wouldn’t normally take, he says.

In Hamilton Architecture’s stream, viewers will find a bit of everything: a bright pink building against a blue sky, a periwinkle Victorian house and faded advertisements on the sides of the buildings.

Thayer recalls one discovery in September 2020 – a red barn just outside of historic Roseville. In the photo on her account, a Christmas wreath hangs next to a worn American flag on the facade of the barn.

“When I came across it, it was like, ‘How did I not know that in the middle of town, all these houses, there’s a huge red barn that’s on the side of the train tracks’ It was just an amazing thing to see,” Thayer says. “And it’s super cool.”

Thayer says Hamilton’s unique character comes from its old stock of manufacturing buildings and homes from the 1800s and 1900s that still stand.