As players travel the planets, moons, and space in No Man’s Sky, they encounter various resources. Some are incredibly useful, even for experienced players; others perform only a few functions. But every resource has at least one purpose, at the very least.

One resource that only serves a few niche functions is a Walker Brain. This is the main loot that drops when killing Sentinel Walkers. Alternatively, they can be obtained from Mercenaries Guild Envoy, Suspicious Packets, Mission Board, or Nexus missions.

The following is a breakdown for those who want to get a few Walker Brains for their intended use or need to know what Walker Brains are used for in No Man’s Sky.

Getting a No Man’s Sky Brain Walker and its uses

As mentioned earlier, a Brain Walker is obtained from Sentinel Walkers, primarily by defeating one. This is a type of Sentinel machine found on planets and moons. Generally, Sentinel machines are hostile, so it’s best to avoid them if players don’t have the proper gear to deal with them.

Players usually come up against small drones. A Sentinel Walker tends to be sent to respond to hostile attacks. For example, if a player fires at other sentry machines. Sentinel walkers will be sent out if the player reaches a specific wanted level.

First, for a Sentinel Walker to spawn, find a planet with Sentinel activity. Scanning planets and moons will provide information on whether they are present or not. Then it prepares and lands on said planet and/or moon. 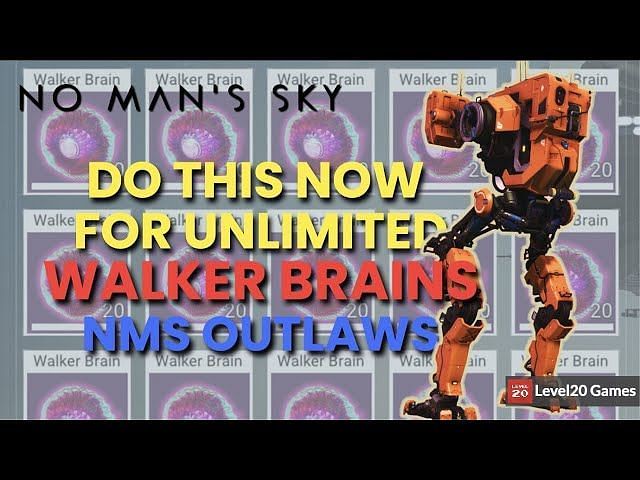 Once on the ground, find a Sentinel machine and start shooting. You’ll need to defeat enough Sentinels to reach Wanted Level 5. This is when a Sentinel Walker will be deployed to your location, provided you haven’t evaded detection. After defeating the Sentinel Walker, collect its body for a Walker Brain.

Walker Brains are only used for two purposes:

Conflict Scanners are attached to starships in No Man’s Sky. Using one can give the player an idea of ​​a star system’s level of conflict while using the galactic map rather than discovering that mission only after visiting it. More of a prevention tool than anything else.

Read also
The article continues below

Explosive drones are useful for frigates in No Man’s Sky. Think of it as a temporary buff. If used on a fleet of frigates, it increases its combat capabilities, but only for a single expedition.