It is probably the most famous Japanese artwork, a truly global image seen in popular culture across the West, even making its way onto men’s socks.

He is “The Great Wave off Kanagawa” (神奈川沖浪裏) a woodcut by Japanese ukiyo e artist Hokusai.

Published sometime between 1829 and 1833, the work is part of Hokusai’s series Thirty-six Views of Mount Fuji.

It depicts a huge wave threatening three small boats off the coast Sagami Bay in Japan Kanagawa Prefecture while Mount Fuji rises in the background.

The image has inspired artists from East and West, and this story continues thanks to Porirua-based artist Alistair McDonald, who used the style of another great exponent of ukiyo- e to perform his home region in Aotearoa.

Andō Hiroshige was a Japanese ukiyo-e artist born in 1797 and considered the last great master of the tradition. His works were known for their striking color, using panoramic views from unusual viewpoints, and many were meisho-e (名所絵) images of famous places.

Some similarities then, with the current work of Alistair McDonald, who spoke to the Asia Media Center about his art and his inspiration.

What first attracted you to this style of Japanese woodblock art?

“I saw a Hiroshige exhibition uchiwa-e fand at the Victoria & Albert Museum in London in 1978, I had seen this style before but not in a collection, so many colors and stories in one room.”

You’ve been doing this kind of work for several years – what keeps you coming back to it?

“I love simple line art, bold flat colors and limited shading (no one has a shadow) but most of all stories from another time and another culture. I tried to imagine how the great artists Hiroshige and Hokusai might have seen New Zealand today One of the main functions of art is to ask us to imagine the world in a different way, I hope my art will do.” Did you choose not to use wooden blocks or did the use of a brush and acrylic give the work a new aesthetic?

“Hiroshige had to employ many specialists – sculptors, colorists, printers and others – and each of these intricate skills involves lifelong learning. I was able to take a huge shortcut by using modern acrylics, and I also had the benefit of the many artificial color pigments developed since the 1830s, when many ukiyo-e works were being produced.

What do you think is the lasting impact of ukiyo-e on Western art and on your art?

“Ukiyo-e sent its own ‘great wave’ through Western painting – Van Gogh, Gauguin, Toulouse-Lautrec, then Cézanne and so on. In turn, European styles impacted modern Japanese art and engraving, such as Yoga, the school and the shin-hanga movements.

For me, there’s also a direct line to modern animation and illustration: Disney, Tintin, The Simpsons and Manga – all of which are great art in their own right.” 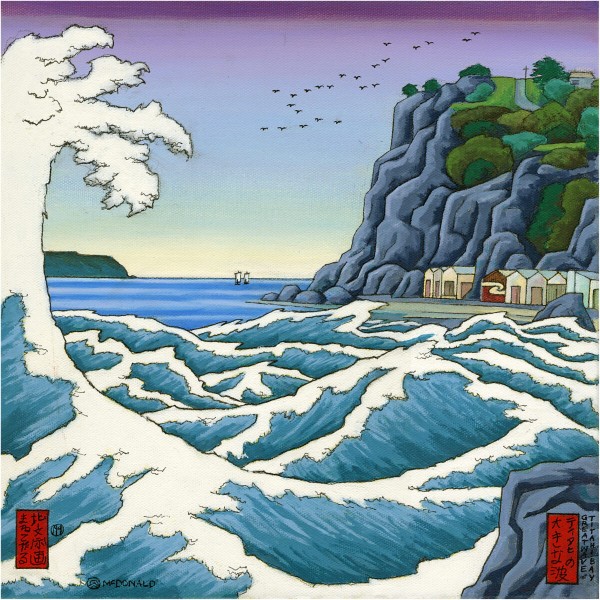 A number of your paintings have ocean waves similar to Hokusai’s ‘Great Wave off Kanagawa’ – are you perhaps comparing New Zealanders’ attachment to the ocean to the same feelings in Japan?

“It’s interesting… We’re both maritime nations, gathering kaimoana is a big part of every culture, but ultimately I think it’s the feeling that we mortals share the enormous power of nature, we are as impressed and as vulnerable as the thirty or so (terrified) passengers on Hokusai’s ships.”

Are the characters in your paintings visitors to the landscape or do they live there and belong to it?

Big question! For me, people belong to the image rather than the setting. The landscape generally dominates for me, I put more people there to humanize the image and help tell a story. Then it’s up to the viewer to decide. 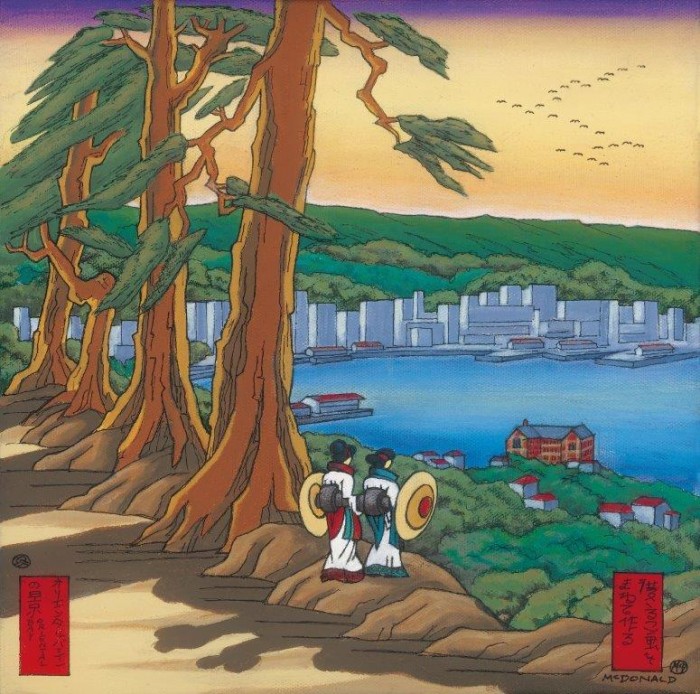 You did some of this style in Australia – how did it go?

“I’ve done 12 Australian images, plus 6 of Queenstown and Wanaka, 1 of Taranaki and 22 of Auckland, 71 in all. I plan to make the Auckland ones more available soon, but in the meantime I’m working on some London, New York and Paris What I can do with those overseas, I’m not sure at the moment, but I have to get there, hopefully soon.

The current exhibition of Alistair McDonald”In the style of Hiroshige“ takes place at the Exhibitions Gallery of Fine Art in Wellington until June 28.

(The artist owns the copyright to reproductions of his works in this article. Republication is prohibited without permission.)